With the combined protection and field control device KOMBISAVE, the developers of the Swiss Phoenix Contact subsidiary NSE have hit the bull’s eye. Even though this should be avoided if at all possible when it comes to the power grids and their safety.

Just follow the 110 kV line to the end, there are no numbers there.” It was clear from the directions that a visit to the substation in Kempen on the Lower Rhine would be a special one. In other words, look up, with the high voltage line firmly in view, and slowly follow it down the road.

Kempen is a city of 36,000 people on the Lower Rhine. It is beautifully situated, has a past rich in tradition, and is currently prospering. Reinhard Bretzke and Michael Kairies are waiting for us in the industrial park on Industriering Ost. The two are employees of the local public utility company that is responsible for the energy supply to their home town. And first of all, they take us right to the heart of their work – their network control center.

Houston – we have landed

The wall of monitors is a bit reminiscent of the famous NASA control room for the astronauts at Cape Kennedy. But things are all very earthly here. “We are responsible for our city’s energy supply,” Reinhard Bretzke says simply. It sounds quite down to earth at first, but it is a job with a direct connection to the future. “We are currently converting our networks entirely to a centralized operation with digital power distribution control systems.” So a little NASA after all!

The power grids are part of what is referred to as the critical infrastructure; i.e., they are subject to particularly strict standards and demands for safety and reliability. No wonder, because without electricity, not even the water supply can run in modern civilization. Bretzke is an old hand at energy. For a good 45 years, he’s been faithful to the topic, and for a long time was responsible for the energy supply in Hildesheim in Lower Saxony. He has been responsible for the power supply in Kempen for five years.

“I was attracted to the green meadow for the network monitoring division in the most beautiful city on the Lower Rhine. Together with my twelve employees, I look after the medium- and low-voltage grid and the associated communications technology for grid monitoring. The tasks are really varied, so the range of demands is extreme.”

One person who takes it in stride is Michael Kairies. The 38-year-old energy electronics technician is responsible for the network control center, among other things. He’s therefore an expert when it comes to integrating protection and automation systems into the Kempen system. With nimble fingers, he calls up the appropriate display on one of the monitors and shows us the distribution of the local Lower Rhine power grid and both the feeders and the major customers who are buying. Meanwhile, Reinhard Bretzke explains why we are actually here.

“We need smart power grids in the future.”

“Our power grids are facing ever-growing challenges. The conversion of the energy supply to renewable energies is changing the feed-in completely. For decades, we have worked with constant feed-ins from large power plants. Now, new energy sources are constantly being added that are also fed in unevenly and distributed in a decentralized manner. At the same time, however, we still need a high level of supply security on the customer side. This means that we also have to rethink power distribution. We need smart grids in the future.”

Timo Beuth, Field Application Engineer at Phoenix Contact, explains: “In energy technology, in addition to high supply reliability, no personal injury or system damage should occur in the event of a fault.” Ground faults occur most frequently in the power grid. In the private sector, for example, this could be a defective cable insulation on the iron; in the medium-voltage distribution network, it could be an excavator that damages the cable insulation or a branch that touches the overhead line during strong winds.

In the example of the iron, a ground fault current flows out over the human body and over the ground when touching the defective line point. A residual current device (RCD) detects that a residual current is flowing and switches off immediately. So quickly that you won’t even notice the electricity. The electrical supply can be quickly restored by switching on the RCD, the person survives, and the electrical system has been protected.

If a branch touches a medium-voltage overhead line due to a gust of wind, things will look a bit different. The energy provider doesn’t want to immediately switch off the power to an entire supply area, but it also doesn’t want to endanger people and systems due to an earth fault current. Because the forces at play here are much greater. Even getting close to the source of the error can lead to a destructive electric arc. So the fault current is virtually bypassed at the “fuse.” Using the “KOMBISAVE” protection and field control device from Phoenix Contact subsidiary NSE, the trick is to be able to safely locate the ground fault current and only switch off the power grid locally. The low-resistance neutral earthing of the medium-voltage transformer reduces dangerous single-pole earth short-circuit currents and prevents an impermissible voltage increase in the immediate vicinity of the fault location. By switching over to other existing reserve feed-ins, security of supply can be quickly restored within a few minutes thanks to the digital power distribution control systems.

Keep your hands in your pockets

Reinhard Bretzke opens the doors in the substation, where the 110 kV voltage from the transport network is transformed and distributed to the 10 kV medium voltage of the distribution network. “Better keep your hands in your pockets,” he says, warning against overly exploratory camera angles with fatal consequences. In this case, negligence is a danger to life.

Behind a control cabinet door with the inscription “Sternpunktbildner” (neutral point-former), the NSE KOMBISAVE is already lighting up for us. “We were really able to adjust and operate the protective device almost immediately, and are still enthusiastic about the easy installation. The integration into our automation system was problem-free, and the required parameters were quickly set in the protective device. In the end, it took us less than an hour to have a ready-to-use and parameterized protective device for a special application out of the box – and that without reading us in. The experts from Phoenix Contact were there to help us with one or two details in no time,” says Michael Kairies, visibly satisfied with the teamwork. “And the Digicom parameterization software of the NSE devices is not only free of charge, but also intuitive to use.”

This not only saves Kempen public utilities time and effort in renewing its power grids. They are also investing in the supply security of their businesses and citizens in the “most beautiful city on the Lower Rhine.” 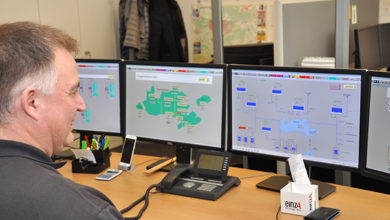