Maik Stemme and Norbert Schulz actually look quite normal. Two fit gentlemen in their prime, casually dressed and relaxed amidst cables, measuring devices and monitors. But they are part of a team that is working on the future. And such people actually wear spacy lab clothes in the middle of hermetically sealed laboratories … but we are in Bad Pyrmont and not in Hollywood.

Nevertheless, the NearFi coupler is causing quite a stir. Not for nothing did it recently win the Automation Award from the trade journal elektroAutomation. The contactless connector transmits both data and power without direct contact of copper and plastic. However, the air gap should not be larger than a few centimeters, i.e. it should be in the “near field”.

This contactless transmission comes into its own wherever connections have to be frequently released and re-established. Examples of applications include tool changers in robotic systems, where errors in conventionally plugged tools can lead to a standstill and thus directly to a loss of production. Conventional connectors with their sensitive pins are at risk of wear and contamination in harsh industrial environments, which can impair their functionality.

In a specific application, the task is to control a valve terminal behind which pneumatic, i.e. compressed air-driven, tools are waiting to be used. The tool itself is equipped with electronics that are supplied with 24 volts. It receives the necessary commands via the controller.

The transfer of energy without direct contact with a plug is already familiar from everyday life, for example with cell phones or electric toothbrushes. Charging takes place inductively by means of magnetic fields. “The principle here is similar, but quite different,” explains Maik Stemme. The development engineer explains the differences: “In the situations described in everyday life, the housings are in contact with each other. And the energy flows slowly and continuously. This is completely different with the NearFi coupler. We can bridge several centimeters of distance with it. In addition, it is necessary to be able to transmit load peaks in a machine control system. While our contactless coupler can constantly transmit 50 watts of continuous power at 24 volts, switching peaks are also no problem during a switching operation.”

However, the angular coupler only becomes really round thanks to its ability to transmit data streams over a distance in addition to energy. At first glance, this is not necessarily spectacular in the age of 5G and RFID. But here, too, the NearFi coupler achieves a technological leap, as test engineer Norbert Schulz explains: “We can transmit Ethernet data in real time. The latency is two microseconds, which is about 500 times faster than the new 5G networks. And completely protocol-independent, because we don’t put a separate radio protocol around the data. You don’t have to specially parameterize the devices to a protocol. And that’s what makes our system so fast and easy to use.”

This makes Ethernet protocols such as PROFINET or Ethercat available without restriction. And this also works when non-metallic materials such as glass or plastic are sandwiched between the transmission surfaces. The gap between the two contact surfaces can easily be up to four centimeters. These are essential conditions for carrying out precise switching and control processes, for example.

“The combination of energy and data transmission is unique in the market.”

The idea for the NearFi coupler had been on the minds of the engineers at Phoenix Contact for some time, as Maik Stemme explains. The 47-year-old development engineer has classical craft roots in his training, having first learned to be a radio and television mechanic. At Phoenix Contact, he was already part of the team on Radioline zum Entwicklerteam, so knows a thing or two about transferring data over the air. “The actual work on the NearFi coupler project then took about 18 months, from the proverbial greenfield to the finished product.” The positive response set in even more quickly, because the new development obviously closes a technological gap.

There are different variants of the NearFi coupler. In the future, the two engineers and their team will be working, among other things, to expand the range of applications for the coupler, for example, to look at other solutions for data transmission. Even if the gap in the transmission of energy and data opens only centimeters – it is a step into the future. 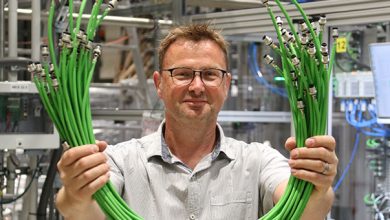