You don’t play with fire. Especially when plastic-sheathed cables are involved. So how does one get the audacious idea of bringing sensitive energy and data conductors into contact with liquid metal and think that this is a brilliant idea?

Time is the decisive factor.” These wise words do not come from an ancient scripture by Confucius, but directly from Cord Starke. And they do not describe a philosophical basic attitude, but the technological trick with which the “Advanced Shielding Technology” works.

Cord Starke is a trained mechanical engineer specializing in power engineering. And when he talks about “his” development in the field of shielding, the spark jumps immediately. With the special shielding of actuator and sensor cables, the graduate engineer and his team have hit the bull’s eye.

Before we move into the machine hall where the first automated production line of Advanced Shielding Technology is set up, Starke describes the development process. “We had the order from our business unit management: rethink shielded connectors! Cable production with conventionally manufactured M12 connectors is inflexible and relatively uneconomical due to the large number of individual parts required, because we always need new connectors with all their individual parts for every shielded cable in every dimension.”

In addition to the sheer number of parts, the production of the shielded connectors in high-wage Germany is also a problem. Cord Starke shudders: “It’s a terrible process for any engineer – the things flutter back and forth, the sleeve goes somewhere it’s not supposed to … The manual processing that used to be necessary is very, very time-consuming. Our goal was to increase the quality of the cabling, automate it and thus make it faster and more economical. Quite simple, isn’t it?”

“The manual processing of shielding
is a terrible process for any engineer.”

Cord Starke smiles when he thinks back to the beginnings of this challenge. The team for which he is responsible was interdisciplinary right from the start: “We started with colleagues from production, the test lab, development and marketing and tried out various things in a really hands-on way. In the process, we directly encountered various problems, such as the design of angled connections or the contacting of the shielding, which is classically crimped directly onto the cable sheath. Or where the shield is pressed between two sleeves.

During one of the many brainstorming sessions, I actually came up with the idea of shielding with metal. We have been able to overmold plastic fully automatically for a long time. Can’t we just cast liquid metal, in this case tin, around the shielding? Liquid plastic is also very hot, so the cables themselves should be able to withstand that? I come from a classical power engineering background, so I have experience in thermodynamics. So I was pretty sure that the heat from this process wouldn’t go into the plastic of the cable at all, but right out into the metal mold.”

This flash of inspiration meant the breakthrough: “The idea seemed so crazy that we first conducted tests in the team. We designed and ordered 3D molds. And at the company’s own prototype shop, which is active for small series and sample startups, there was still a tin bath and testing equipment available.

And then we just got started. We had briefly tasted at what point the liquid tin would destroy the plastic of the cable, so we knew we had about five seconds before it got too hot for the cable. So stripped the cable and put it in our mold, put on safety goggles and with plenty of respect got the tin hot and liquid and poured it into the mold. Against all expectations, no explosion took place (laughs).”

The surprise of the researching engineers was great, because after opening the mold, the cable including metal shielding already looked almost standard. So they went straight to the test equipment, where high voltage was applied. And the very first test showed that the shielding worked.
Starke continues: “Then a small series of twenty parts was produced, which we measured in the test laboratory for their contact resistance of the shield contact. The standard allows 100 milliohm (mΩ), and we immediately had values of less than 1 mΩ, i.e. actually only the resistance of the tin itself. The next step was to the climatic chamber, where the resistance may not increase by more than 5 mΩ within the test cycles. Despite the attempted material murder, nothing happened there, no increase in resistance, even after hundreds of hours in the run.

Then came tests with high current: we ran two kiloAmps (kA) across it, then three, five, eight, twelve – again nothing happened. With these results, we dared to come out of the woodwork and initially presented the technology to our business unit here in order to get the order to continue working on it on a larger scale. We knew that it would make technical sense to shield with liquid metal. But now it was a matter of mapping this in production as well, in other words, developing manufacturing methods.”

Starke grabs his jacket, we change location from the office to one of the production halls, where the first fully automated production line for the hottest plugs is being set up.

From product to production

Starke is noticeably proud: “We received input that our mold shop had already tried its hand at a similar development. At that time, an attempt was made to cast current bars for terminal blocks. The idea was based on a project at RWTH Aachen University, where experiments had been carried out with low-melting metal alloys for conductor paths. Heated ski goggles were tried out there, for example.”

Some of the experts working there at the time now work at Phoenix Contact. This paid off: By exchanging experts, Starke and his team were able to track down important equipment: “The melting pot and the melting pump were still in the basement of our machine shop. We then dragged them to us and got started. Right from the start, the team from internal toolmaking, internal mechanical engineering, production and development had their sights set on various expansion stages of production right up to full automation. In this way, individual part, article tool and machine design could be optimally coordinated with each other. The advantage here is clearly Phoenix Contact’s high vertical range of manufacture.”
The first pre-series parts were then created using an injection molding machine and special test cavities, i.e. molds that the team built. Numerous tests were necessary, including with the surprisingly aggressive tin, which attacks and dissolves all metal machine parts. Various coatings were tested to increase the service life of the machine.

The pilot series were tested and exhausted further and further. Cord Starke is still amazed: “And we simply didn’t break them! So the quality was top. Then it was off to industrial engineering to calculate the costs. And interestingly, it turned out that production with an interlinked system was highly economical, in contrast to the previous way of working with numerous manual processes.”

The team succeeded in significantly reducing the cycle rates in automated production compared to manual production. The liquid tin is fed in precisely metered quantities and takes only one second to cure in the thin application. In addition, the number of parts required is drastically reduced from several dozen in the crimped version in previous production to just a few in automated production.

In the new process, the thickness of the shielded cable does not matter at all in production – quite unlike before, where the cable always had to be thinner than the connector and its shielding sleeve. Starke explains: “This allows us to shield cables with very different properties, up to 16 amperes of current. It helps that heat dissipation is also significantly better due to the ideal connection of the tin to the plug.

M8 and M12 are offered by us as standard. And also in an angled 90-degree version. The possible applications are enormous, because there is no one in the world who can manufacture shielded cables fully automatically. And since good ideas belong protected, we have applied for various patents on the process and product.”

It’s a development with great potential, as Industrial Ethernet is gradually displacing the world of fieldbuses, Starke says. “The office world and the manufacturing world are growing together. And with that, the need for shielded cables that cannot be disturbed by outside influences is also growing strongly.”
Cord Starke points to the impressive production line, where liquid metal nestles around the cable in precise time: “It’s simply fun to work in a company where development of this depth is possible. Where will you hear: It’s totally crazy, but do it! You get time and resources and support from our teams, then you can get started. That’s what Phoenix Contact is all about, that’s our spirit.” 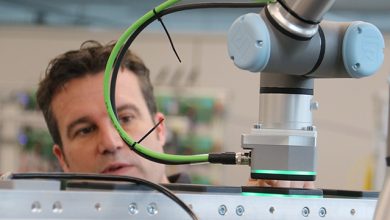 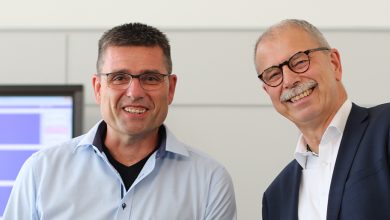