25 years of Phoenix Contact at the Bad Pyrmont site – basically, it all started with a trip to the Netherlands in the 1980s. One of the managing directors at that time brought back from a trade fair the realization that Phoenix Contact absolutely needed a foothold in the young discipline of electronic automation. With the Interbus fieldbus system, a corresponding product series was started.

25 years ago, Bad Pyrmont was simply a place in the surrounding area for most employees at Phoenix Contact. There, in neighboring Lower Saxony, a subsidiary called Phoenix Electronics was founded on June 21, 1996. The missing “Contact” was not added until 2004.

For the first time, a new production was not realized at the Blomberg site: “The requirements for the production were so new and special that we wanted to realize this central project detached from the ‘everyday’ Blomberg operation,” describes Hans-Jürgen Koch, member of the management of Phoenix Contact Electronics.

Construction of the building began in the winter of 1994/95. “The location was close. Moreover, we were welcomed with open arms by both the city and the country.” 25 years ago, the building was completed and production began. “Bad Pyrmont was planned as a pure manufacturing site. Development, sales, marketing, these functions were to remain in Blomberg.” In the meantime, this has become a site with around 1,800 employees.

And Bad Pyrmont has long since acquired a very special sound for the Blomberg colleagues as well. 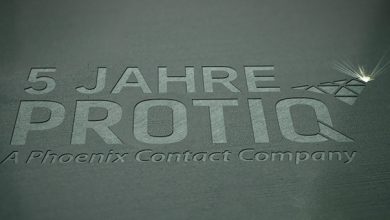