Actually, an automobile is neither particularly car nor particularly mobile. It sits around most of the day, and it can’t be autonomous (yet). But if you switch the energy source from fossil to electric, completely new and exciting possibilities open up.

The term from which e-mobile dreams are made is “bidirectional charging”. Behind this is the possibility of sending the energy for propulsion not only by tank nozzle and thus in a one-way direction toward the vehicle. In the fossil world, it waits there in the form of liquid gasoline or diesel to be used without providing any further benefit. When the car stops, nothing else happens.

In the age of intelligently used electrical drive energy, however, it is possible to dramatically increase the value of this property. To do this, the charging technology only needs to be able to communicate meaningfully with the battery and control the charging currents in such a way that energy can be extracted. Et voila, bidirectionality is ready. And thus one of the possible game changers of the energy transition.

On the one hand, the switch from fossil to electrical energy alone means a significant reduction in carbon dioxide. But the power grids themselves also benefit. After all, the world of electricity-carrying copper and the power stations that supply it do not like fluctuations. For decades, these giant power generations have been humming along at a steady pace, feeding electricity into the grids at a steady rate. Just no fluctuations!
But since renewable energies have begun their triumphant advance, the formerly sedate world of power supply has become severely stressed. Solar power stations only supply when the sun is shining. And wind power feeds in only when the wind blows.

In addition, there are now consumers that no one had in mind 20 years ago. The rapidly increasing electrification of mobility means that large amounts of energy are being called up for which the distribution networks are not designed. This not only makes for warm copper cables, but can also lead to supply gaps if several electric vehicles are to be charged in a street after work.

These fluctuations are to be kept in check by energy storage systems. They store energy when the sun is shining and the wind is blowing. And they release energy into the grid when lulls or darkness reduce the yield. The problem is that these systems are large, very expensive and far from available in sufficient numbers.

Against this background, it becomes understandable why an armada of mostly stationary but mobile energy storage devices such as the batteries of electric vehicles is arousing desire. But how can this still untapped energy treasure be tapped?

One company that has been dedicated to this topic for a long time is based in Kriens, Switzerland. For more than twelve years, Evtec has been developing and manufacturing charging technology for almost everything that wants to be powered by electricity, from automobiles to light and heavy commercial vehicles, urban transport companies with their buses, boats and ships. And if need be, even a tractor is designed so that it not only pulls arable furrows, but can also be available as a mobile energy storage unit.

Evtec was founded in 2010 by Marco Rodolfo Piffaretti, among others. The bearer of this melodious name is one of Switzerland’s electric car pioneers and a trained car designer. The small startup has long since become a recognized force, with branches in various European countries. Dominik Mock opens the doors at the Swiss headquarters. Here in Kriens, around 40 employees think, assemble and monitor innovative solutions in charging technology.

DC power for the garage

Dominik Mock is head of sales and, as a trained electrician, a man of the trade when it comes to the inner workings of charging technology. Together with Swiss Phoenix Contact colleague Stefan Staiber, we are on the trail of a very special wallbox. Because in the past, DC charging was thought to be more about the lightning-fast charging of large batteries, for example on highways, but today it’s supposed to be a bit more leisurely. This special wallbox with the euphonious name “sospeso&charge” is designed for use at the workplace or at home. Charging is still done with direct current, i.e. comparatively quickly. But the dwell time with a charging power of 10 kW cannot be compared with those at classic fast charging stations.

The wallbox is installed using a three-phase supply line with 16-amp fuse protection. In other words, the installation is comparable to a normal stove connection and does not require any extensive work on the house electrics. Between the house connection and the wallbox, an energy meter is required, which finds its place in the domestic distribution board. By means of a network connection, the control communication is established. Et voila – the term “service station” is already starting to become a similar discontinued model among future users as the cassette recorder or telephone booth. A 20 kW version has been announced for larger charging capacities in 2022, because the batteries of e-mobiles are growing in line with the required range.

The real highlight, however, is the bidirectionality that the “sospeso&charge” is capable of. This explains the somewhat unwieldy name, which is based on the Caffé sospeso. This is a cultural feature originally from the greater Naples area, where an additional coffee is paid for in addition to one’s own. This is noted by the barista and later poured out to a needy person on demand.

This lived solidarity and tradition of taking and giving aptly describes bidirectional charging. After all, not only is electricity taken from the e-car, but it is also given back, so to speak, on demand by someone in need. In detail, a distinction is made between two types of charging: Vehicle-2-Home and Vehicle-2-Grid.

Vehicle-2-Home (V2H) refers to the use that typically focuses on the end user at home. If the wallbox is connected to the home network, then the user’s own car can not only be charged, but can also serve as an energy storage device. If there is a solar system on the roof of the house, then the wallbox establishes a connection between the generator and the storage unit at times of power surplus – the car battery is charged. If the car is parked at night, the wallbox detects any demand in the household grid and feeds in energy.

In this way, self-consumption can be increased without having to install an additional costly stationary battery in one’s own home. In times of rising electricity prices and falling feed-in tariffs, this is an increasingly attractive model.

For utilities, bidirectional charging, referred to here as Vehicle-2-Grid (V2G), is also attractive for a completely different reason: It can be used to absorb strong fluctuations and loads on the power grid. Mock refers to it as “breaking the load peaks.” The batteries of millions of electric cars form a virtual buffer store, absorbing renewable electricity at times of high availability and later making it available again to a certain extent at times of low availability. The whole process is controlled via communication between the grid operator and the wallbox. V2G can thus increase the share of renewable energies in the energy mix and become an important component of the energy transition.

“Bidirectional charging,” Dominik Mock explains, “is technically no longer a problem. But the framework conditions are still unclear in many cases, such as standards and norms. And the car manufacturers have to follow suit. At the moment, only one Honda model is charging bidirectionally using the CCS standard. The rest of the still small group of vehicles rely on the CHAdeMO standard and the already established communication between charging station and vehicle. Bi-directional charging is actually a software issue. Today’s vehicles should actually be able to do this, and it could be enabled over the air. The challenge will be to preserve the infrastructure you have in the field today and adapt it to customer requirements.”

Money is talked about

Another obstacle is certainly the price, as the 36-year-old Head of Sales at Evtec openly points out: “With acquisition costs of around 10,000 euros, the solution is currently of interest primarily to fleets and early adapters. However, the expert is certain that economies of scale will quickly occur here, making the technology more cost-effective and thus more attractive for a broad customer base.

“And this is exactly where Phoenix Contact is the ideal partner,” Mock elaborates in a dialog with his Swiss contact Stefan Staiber. “You have developed exactly the right technology to make DC charging attractive in this area. Slim and thus lightweight cables that are extremely resilient and durable, and in this load range do not require complex and thus expensive cooling. And a plug that is anything but clunky, despite the CCS plug face.”

Stefan Staiber, himself a veteran of the Wave-Trophy and thus also familiar with all the electromobile waters, adds: “The CCS C-Line charging cables and plugs used by Evtec have been specially developed for wallboxes. We have found that the large HPC charging plugs including cables are indeed ideal when it comes to tough use at public charging points. But in the private environment, we are shooting with cannons at sparrows. CCS-C-Line fills exactly this gap with the right choice of materials, the right robustness and a design that doesn’t remind you of a gas station. Silver-plated contacts, an internal sealing concept and highly sensitive temperature sensors are safety features that make handling both the European CCS Type 2 standard and the primarily American CCS Type 1 standard simple and safe. These are important features, especially in the private environment.”

During a tour of production in Kriens, Dominik Mock explains: “Behind each of our developments is a specific order. We can respond very individually to customer requests, for example, DC-DC charging stations or an integration of payment terminals. We have even developed an integration of coffee vending machines. For us, the topic of charging is a huge playing field. And bidirectional charging is one of the most exciting topics on it.” 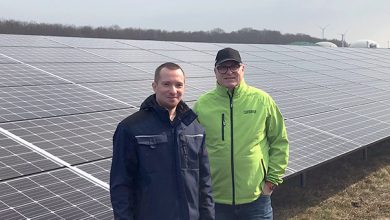