Teamwork is the order of the day when Tim Greinert goes to the stadium. The 29-year-old field service engineer is part of the Phoenix Contact team that is taking care of the retrofit, i.e. a fundamental technical renewal, of the aging SchücoArena. This is not a task that can be completed quickly, because making an existing soccer stadium technically fit for the future without interrupting the game is like open-heart surgery. But a long-term approach is something that Arminia Bielefeld, founded in 1905, knows how to handle. And also at Phoenix Contact, which is only slightly younger (1923).

No worries in the 2nd league

The club’s relegation from the top flight is currently sealed, but even the 2nd Bundesliga is not a disaster for the traditional club. “We have almost the same average number of spectators, whether in the first or second league,” says Christian Venghaus, not without pride. The 49-year-old Armine is in charge of stadium operations and matchday organization, so as “landlord” he is very closely connected with “his” stadium. And he has already experienced turbulent times for his club and the stadium: “It was really difficult when we were in the third division, because we really don’t have the financial resources to maintain and operate a stadium in the middle of a big city. However, Venghaus sees the long-term goals quite differently: “With our stadium, we want to be in the Champions League.” Venghaus has to smile in the face of raised eyebrows: “Stadium, not team. Even my optimism isn’t that great; we’ll probably never play in the Champions League or become German champions. But we want to make the most of the opportunities available. And in terms of stadium, we can become champions.”

The stadium manager believes he is well positioned to meet this challenge. He is assisted by Maik Lohmeyer for IT and Daniel Müller for facility management and technical management, two experts with many years of experience. In other words, a three-man team when it comes to stadium renovation. The trio becomes a forward line through the cooperation with Phoenix Contact. “We thrive on the emotions of the stadium. 20,000 spectators, floodlights, great atmosphere – that’s our lifeblood. We can do that, we have that under control. But not the technological side of things. For that, we need strong partners. And that includes Phoenix Contact in particular.”

The heart of Bielefeld

But what significance does an inner-city stadium have outside of the popular sport of soccer, especially since its turf is reserved only for the small band of professional soccer players and the rest of the facility is only occupied every 14 days for home games? Venghaus disagrees: “We are the emotional engine of the city and the region. Of course, we struggle with the logistical disadvantages, especially with regard to the arrival and departure situation and the parking shortage. But people love the proximity to the city, can come by bike, public transport or even on foot, and have a nightcap in one of the pubs around directly after the game. There are very few comparable stadiums left in the professional leagues, such as Bochum, St. Pauli, Kaiserslautern or Munich 1860 – these are unique selling points that these clubs benefit from.”

IT manager Maik Lohmeyer adds: “We are not a multifunctional arena with major events outside of match operations. The office has 60 employees who are active on site every day. In addition, there is space that is rented out as normal. We also have issues like the stadium school, where students come to us three days a week for lessons. Then workshops and conferences are held here. However, there are no evening events such as parties or weddings. So there’s a lot going on in the SchücoArena during the week as well.”

Daniel Müller has been with Arminia for 22 years and knows the Bielefeld venue like the back of his hand: “Our stadium is from 1996, in parts from 1999, and in parts from 2008. And you can clearly tell by now. For example, when our catering stands are supposed to work cashless and can’t be wired, or the entrances are supposed to work with scanners and there weren’t even any power lines there.”

Christian Venghaus is aware of the need for a modern venue: “On the one hand, we want to uphold soccer culture. But on the other hand, we also need a state-of-the-art stadium where admission is easy and digital, where cashless payments can be made. We dared to take this step in the pandemic, and so far we have not regretted it. You have to unite the topic of digitization with soccer culture. 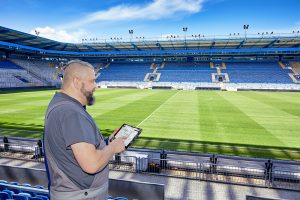 The link to the film

And we want to play the topics of sustainability and energy efficiency very actively. Particularly when it comes to issues such as water consumption or energy savings, we want and need to get better. Sustainability will also be given a special role in the licensing process of the German Football League, so we are glad that we have already started on this.

Waste, water, electricity, light and noise emissions – we need data for this, such as spectator or parking space tracking. With digitalized user guidance, i.e. active spectator management, we avoid queues at catering points or toilet facilities, for example, and thus enhance the positive experience of visiting the stadium.

Automation instead of walking

Daniel Müller describes the concrete benefits of modern control technology: “The ongoing operation of the SchücoArena alone – in the past, we had to send extra people around after the game to turn off the lights everywhere. Today, some of this can be done from a cell phone or laptop. In the future, this will be done via the building control system and then largely automated.”

Phoenix Contact employee Tim Greinert has been a regular visitor to the Bielefeld Alm for a year and now also knows the stadium behind the scenes: “We started by replacing old control cabinets in the VIP area and the museum, then it was the turn of the cabin area. As part of this retrofit, we installed Building IoT controllers that run our Emalytics building software. That interfaces with all the other systems that have been installed in the stadium so far, including the electricity meters for the catering stands. And it creates the possibility of centralized access to the functionalities.”

Maik Lohmeyer is working closely with the Phoenix Contact experts and explains: “This step-by-step approach is planned and necessary, because before we start on the construction phases, we have to create the technical foundations on site, such as pulling network cables or laying new power lines. So far, we don’t really have a uniform structure in the stadium. This has grown gradually. For example, if the DFL’s licensing requirements meant that we needed networked goal-line cameras or that the press stands had to be equipped with network technology, then we expanded it selectively. Step by step, we are now upgrading the stadium so that we can use modern control elements in the first place. And we mustn’t forget that we have an ongoing operation that can’t and mustn’t be interrupted.”

During a soccer match, the organization in the background must function smoothly. But anyone who thinks of a large control room and lots of monitors is wrong, as Tim Greinert explains: “We connect the modern controls in the new control cabinets to the building management system. Not only the ventilation systems but also the consumption meters already run via this. This means that Arminia colleagues like Daniel Müller can access this data via tablet or laptop from anywhere and influence it if necessary. You get a message on your cell phone and then take action, which runs via an alarm management system.”

But the term “home office” isn’t quite right, as Lohmeyer and Müller smile: “On weekends, we’re almost always active, especially at home games. That’s when we like to work a seven-day week. Four to five people have access to the technology and can then become active as needed.

When the experts at Arminia Bielefeld talk about control, however, they are not just referring to meter readings or visitor flows, as Maik Lohmeyer explains in the dressing room corridor: “In this corridor, which leads from the dressing rooms to the pitch, the light and sound are adapted to the respective team. The opponents are supposed to be intimidated and made a little nervous! When the opponent comes, it gets dark and loud. Thunder, lightning and rain – we’ve already instilled the fear of the Teutoburg Forest in the ancient Romans here.” Then with choreography, fighting spirit and Emalytics nothing should stand in the way of a renewed rise!